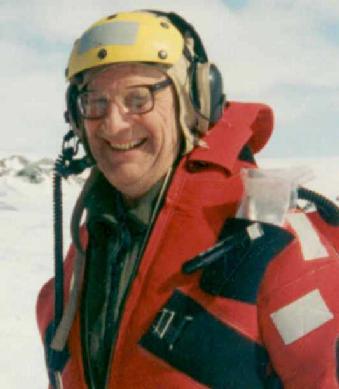 Professor Charles R. Stearns (1925-2010) passed away on Tuesday, June 22, 2010. He recently celebrated his 85th birthday. Dr. Stearns was a professor in the Department of Atmospheric and Oceanic Science and Senior Scientist at the Space Science and Engineering Center, both at the University of Wisconsin-Madison. His association with the University of Wisconsin spanned a period of 67 years. He was an undergraduate student at the University from 1943 to 1950 earning a Bachelor of Science in Physics, after his service in the United States Army (1943-1946). Stearns graduated with his Master of Science degree in 1952, and later his Doctorate of Philosophy in 1967, both in Meteorology. He served as a member of the faculty since 1965. Stearns taught over 11 classes during his career and was involved in over 9 field projects. He was the principal investigator of the Antarctic Automatic Weather Station (AWS) Program from 1980 to 2008. The AWS project was the first large-scale meteorological instrumentation of the Antarctic continent. He deployed to Antarctica 18 times. He was advisor to 30 students over his career, and provided significant assistance to a half dozen other students in the US and abroad with their research. Professor Stearns was a deeply respected colleague and a generous spirit who spent years instrumenting the Antarctic continent and exploring its weather and climate as well as their impacts on the rest of the world. His work on instrumenting and observing the Antarctic was world-renowned. He will be sorely missed.

There is an obituary at the Gunderson Funeral Home web site.

There is an obituary from the Wisconsin State Journal.

There will be a celebration of Professor Stearns' career a the 5th Antarctic Meteorological Observation, Modeling, and Forecasting Workshop July 12 through the 14th at Byrd Polar Research Center, The Ohio State University.

The Antarctic Sun has published a brief article regarding Professor Stearns.

Chuck Stearns Memorial Blog - A place for all to share condolences, sorrow, or memories of Chuck.